The movie Black Panther earned more than $1.3 billion worldwide[30] and sparked a flood of articles, talk show discussions, reports, and more. The consensus was that Black Panther is not just another superhero film of Disney’s Marvel Studios, but a cultural phenomenon. The film follows a trend in Hollywood (or reinforces it) to create more leading roles for non-white actors. However, the hype surrounding Black Panther is part of a longer development, the diverse settings of which extend far beyond Hollywood and the Western world. But one fact remains: Black superheroes are currently in vogue.

However, Black Panther also shows this trend’s area of tension. E.g. the film launched discussions about whether it shows a distorted, US-centric view of Africa.[31] Since their creation, superhero comics and films with black characters have moved between positive portrayals and profit-oriented exploitation of both African and African American culture. Starting in the early 1970s, political and social themes were increasingly to be found in superhero comics as a sign of a development away from classic good vs. evil narratives and the long tradition of apolitical superheroes.[32] In this context, the first black superheroes at Marvel and DC Comics were created.[33] These heroes were used, on the one hand, to address the contemporary race riots in the USA, but also to bring the flourishing market of Blaxploitation films into the comic world. However, these comics were and still are criticised for their stereotypical depiction of African American milieus.[34] 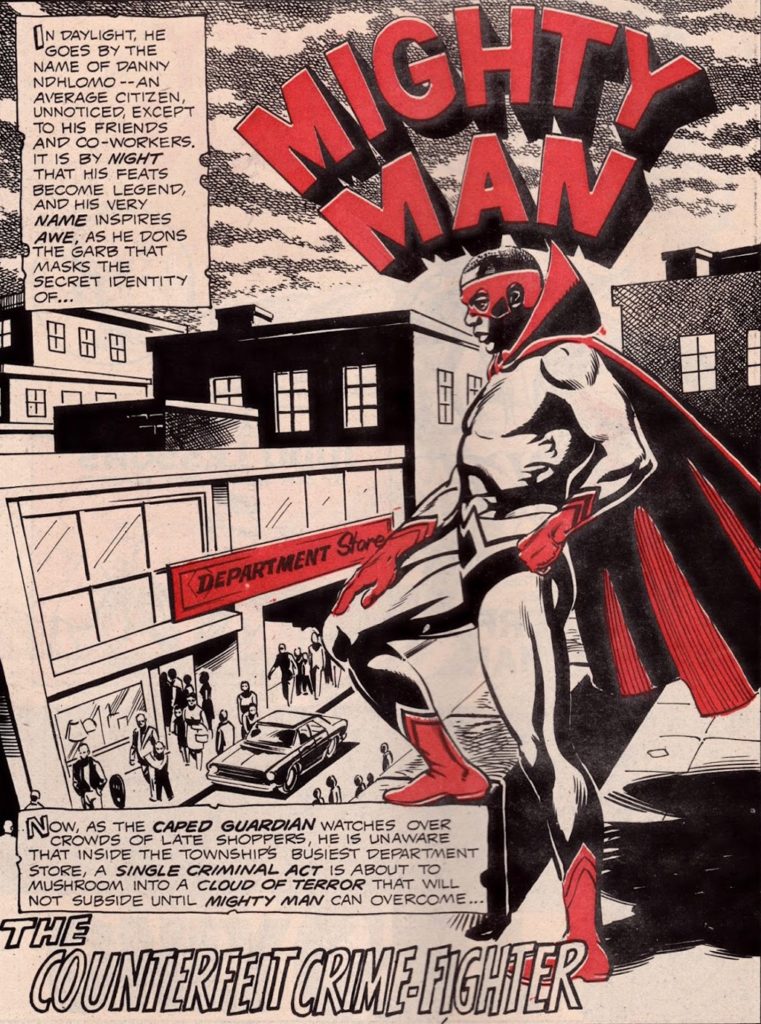 The US comic market has always been leading the way in the superhero genre. Thus, the first superheroes for the African market were created only after the success of these American characters. The tension between commodification and the genuine desire for more African heroes and more pop cultural narratives from or about Africa was, and still is, central in the various African comic scenes. It comes as no surprise that two of the continent’s biggest comic scenes are based in the continent’s biggest economic centres: South Africa and Nigeria. The first superheroes marketed there can be found from the 1970s onwards, a time that was very different in the two countries: Nigeria was still a very young, post-colonial democracy in this decade. Accordingly, the country struggled with the consequences of neo-colonialism, most obviously in the form of business relations and dependencies on the former colonial power. South Africa, on the other hand, was experiencing the tragic peak of the totalitarian Apartheid regime. The 1960s and 1970s were marked by the stricter implementation of Apartheid’s racial laws, the subsequent protests and the often bloodthirsty repression of the state. Unsurprisingly, the two oldest superheroes of these countries reflect these contexts. 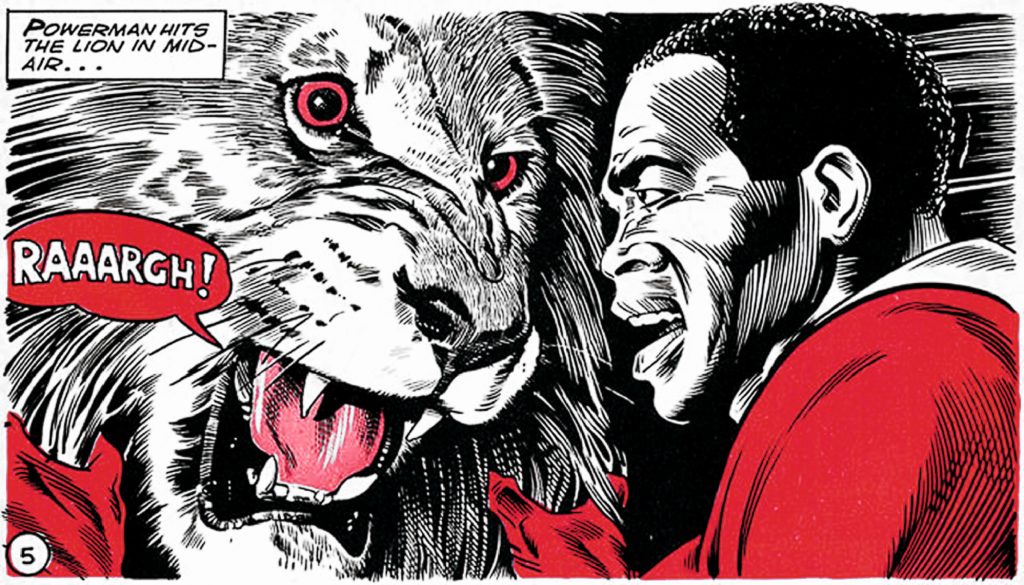 The comic Powerman, for example, was produced in England for the Nigerian market, thanks to investors from the advertisement industry.[35] On the one hand, the comic contains clichéd and exoticising elements (e.g. Powerman’s leopard overtrousers).[36] On the other hand, the stories often contain modernising undertones, depicting a struggle between nature and electrification. South Africa’s first superhero, Mighty Man, however, was a product of lobbyists close to the state and part of a larger Apartheid propaganda project.[37] Mighty Man is an apolitical, black policeman who fights petty criminals in South Africa’s ghettos at night. Both superhero comics had either their origins abroad or were initiated by external funding.[38] However, there were also serious differences in content due to the different political situations. In Powerman, paternalistic and neo-colonial traits appear, but these are not as pronounced as in Mighty Man’s propagandistic adventures.

Today’s scene in both countries is influenced by new political and cultural tendencies. The art movement of Afrofuturism, which was also decisive for the aesthetics of the Black Panther movie, is particularly important in this context. Modern comics from South Africa and Nigeria have in common that their producers (all of whom now come from these countries) want to showcase new, positive, heroic role models who come from Africa and with whom a local readership can identify. The comic scene in Lagos relies on many independent, internet-based publishers, all of which try to create connected comic universes in the style of the big US publishers. YouNeek Studios, Comic Republic and Vortex Comics are notable examples. In South Africa, on the other hand, the superhero project Kwezi by afrofuturist artist Loyiso Mkize enjoyed great success. However, the tension between political statements and commercialisation remains. Thus, most of these comics are committed to genre clichés and their heroes do not always have great political consciousness.[39] Nonetheless, the superhero genre offers artists the opportunity to integrate political discourses into a popular format and infuse the familiar formulas with new content. The current trend has reinforced this movement towards the more political, and there is quite a large audience for it. In the future, more superheroes are likely to fly over Lagos, Johannesburg and other African metropolises.