Comics serve not only for entertainment but are also ideal for bringing across political views: on the one hand in the form of propaganda, on the other as critique and satire in form of cartoons and comic strips. They offer the opportunity to present complex relationships concisely and forcefully and to trigger an emotional response in the audience.

Ill. 1: Xiconhoca is a parasite. He refuses to work and does not participate in the production. FRELIMO (ed.): Xiconhoca o enemigo. Maputo 1979, n. pag.

One example for using a cartoon figure as a tool of propaganda is Xiconhoca from Mozambique. In 1975, when the country, after a ten-year war, gained its independence from the colonial power of Portugal, the former liberation movement FRELIMO (Frente de Libertação de Moçambique) established a socialist one- party state. After several centuries of colonial rule, the young nation faced many problems: on the one hand economic and political ones, on the other the hostility of the neighbouring countries of Rhodesia (today’s Zimbabwe) and South Africa, which at that point were still governed by apartheid regimes. In this context emerged the cartoon character of Xiconhoca, which was first presented in 1976 by the Department of Information and Propaganda in the magazine Tempo.[24] Xiconhoca was the paradigm of the inner enemy; he represented everything that the new, socialist state opposed. The name is a portmanteau from Xico (from Xico-Feio, a term for an agent of the colonial secret service) and Nhoca (the word for snake in most Mozambican languages).[25] Xiconhoca supported the country’s external enemies, sold goods on the black market and was corrupt and lazy. He was almost always represented with a bottle of alcohol and a cannabis branch in his pocket Xiconhoca’s antithesis was Homo Novo, the upright and progressive socialist citizen.

Due to the country’s economic difficulties, the campaigns in which Xiconhoca was used focused increasingly on everyday problems such as waiting times for health care or food shortages.[26] Xiconhoca was portrayed as a profiteer, an enemy of the planned economy who sold food on the black market, or as an official who demanded bribes. The government thus attempted to portray the inner enemies as the cause of the supply difficulties that undermined the nation through unpatriotic behaviour. After the end of the Civil War in 1992 and the democratic elections in 1994, Xiconhoca disappeared as a government propaganda figure. He lives on, however, in the vernacular as a term for someone who benefits through immoral activities such as bribery.[27]

Satirical newspaper cartoons and comic strips are widespread in Africa and much enjoyed. Many cartoonists, however, have difficulty finding their niche, on the one hand because of political repression and censorship, on the other hand because the artists are not paid a living wage. In many African countries there are only a few newspapers, and these often have small editions.[28] The internet and new forms such as desktop publishing, however, also offer new distribution possibilities. In many African countries, for example in Tanzania, in Western Africa and especially in South Africa, which has a long and rich tradition of political newspaper cartoons, there is a diverse landscape of comic strips and cartoons. 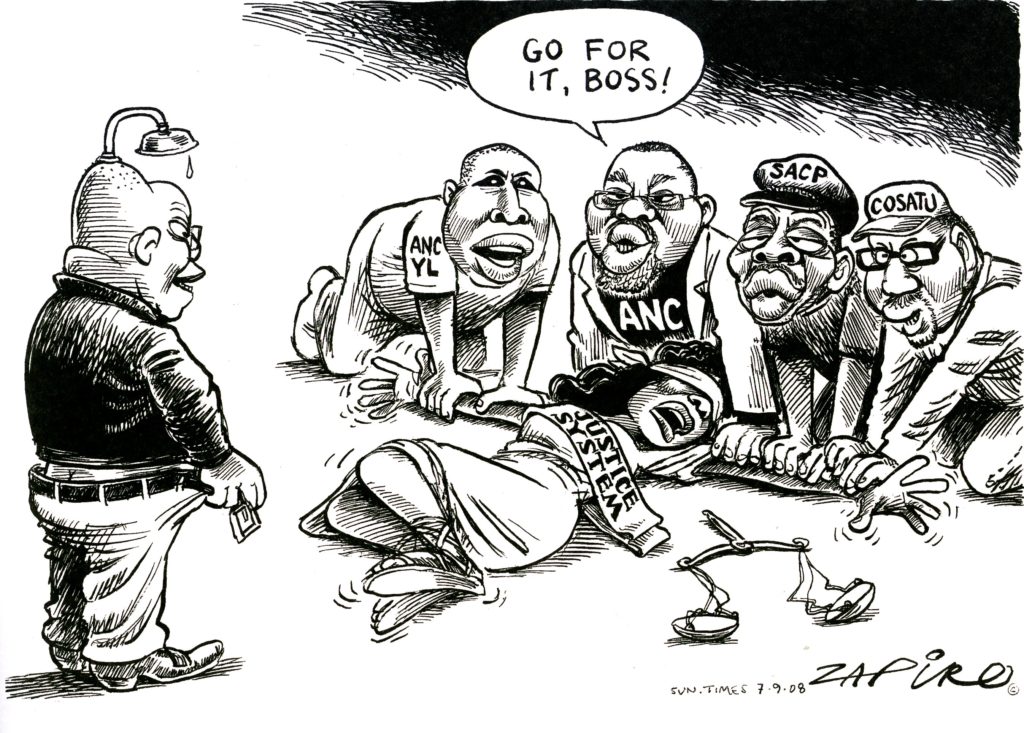 Ill. 2: The Rape of Justice refers to a rape trial against the then presidential candidate Jacob Zuma. During the trial Zuma’s allies tried to pressure the judiciary. The cartoon provoked fierce reactions. Zapiro / Wills, Mike: Democrazy. Auckland Park 2014, p. 151.

Jonathan Shapiro (born 1958) publishes under the pen name of Zapiro and is today probably the most famous South African Cartoonist. As a supporter of the Anti-Apartheid-movement, he was fairly lenient with the new government in the first few years after the democratic transformation in the nineties. Today, however, he is one of the sharpest critics of South African politics. While he used to present Nelson Mandela as Madiba, the benevolent father of the nation, his successor as president, Jacob Zuma, was almost always portrayed with a shower on his head: an allusion to a rape trial during which Zuma had declared that he had been protecting himself from AIDS by taking a shower. Zuma also appears in one of the most famous and controversial cartoons of Zapiro, The Rape of Justice. This alludes to attempts by the political allies of Zuma to exert pressure on the judiciary during the aforementioned rape trial. The image triggered violent reactions, even among fans of Zapiro.[29] Although referring to a specific trial, the image draws on the racist stereotype of the dangerous black man who assaults white women. Zapiro drew the figure of Justitia as a black woman, but she is traditionally portrayed as white. The effect was reinforced by the ongoing epidemic of sexual violence in South Africa. The cartoon led to accusations of racism, protests and demonstrations against Zapiro and the newspaper. Zuma filed an – unsuccessful – defamation lawsuit, and tighter controls of the press were discussed, but ultimately rejected. Zuma served as president of South Africa from 2008 to 2018 and remained a frequent target for Zapiro.

Other common themes of Zapiro are the inadequate AIDS policy, long neglected by the South African Government, as well as corruption and divisions in society. The fact that Zapiro’s works provoke controversy lies, on the one hand, in the nature of the cartoon, which forces complex themes into a single panel and easily over-exaggerates, and on the other hand with Zapiro’s keen sense for his opponents’ weak spots. The tension between freedom of expression and protection against discrimination and degradation is always an issue, not only in South Africa, but throughout the world. Zapiro’s work shows that cartoons have the power to stimulate important discussions about open societal issues and grievances.