Strictly speaking, “Everyday Life” does not exist as a comic genre. With the help of the medium comic, however, new and vivid aspects of everyday life in Africa can be revealed. The field of “Everyday Life” deals, for instance, with issues of family life, education, violence, gender roles, financial hardship, health, racial discrimination, migration, love, and sexuality.

A comic series, well-known in Europe, that illustrates everyday life in a memorable way is the six-volume series Aya by the Ivory Coast author Marguerite Abouet[18] and the French artist Clément Oubrerie. The comic series Aya is Abouet’s first work and contains autobiographical elements of her childhood in Côte d’Ivoire.[19] The protagonist is the young woman Aya from Yopougon, a suburb of Abidjan. The volumes show in an expressive and humorous way everyday life in Côte d’Ivoire in the 1970s. All stories take place in “Yop City” in the period almost immediately after independence, a period of recovery, in which a new, more affluent middle class began to emerge. Relations with neighbouring countries and the former colonial power of France were intensively cultivated, creating a unique blend of African cultures and modern Western ideals. This had a direct impact on subjects such as education, language or women’s rights, which are also treated in Aya.[20] 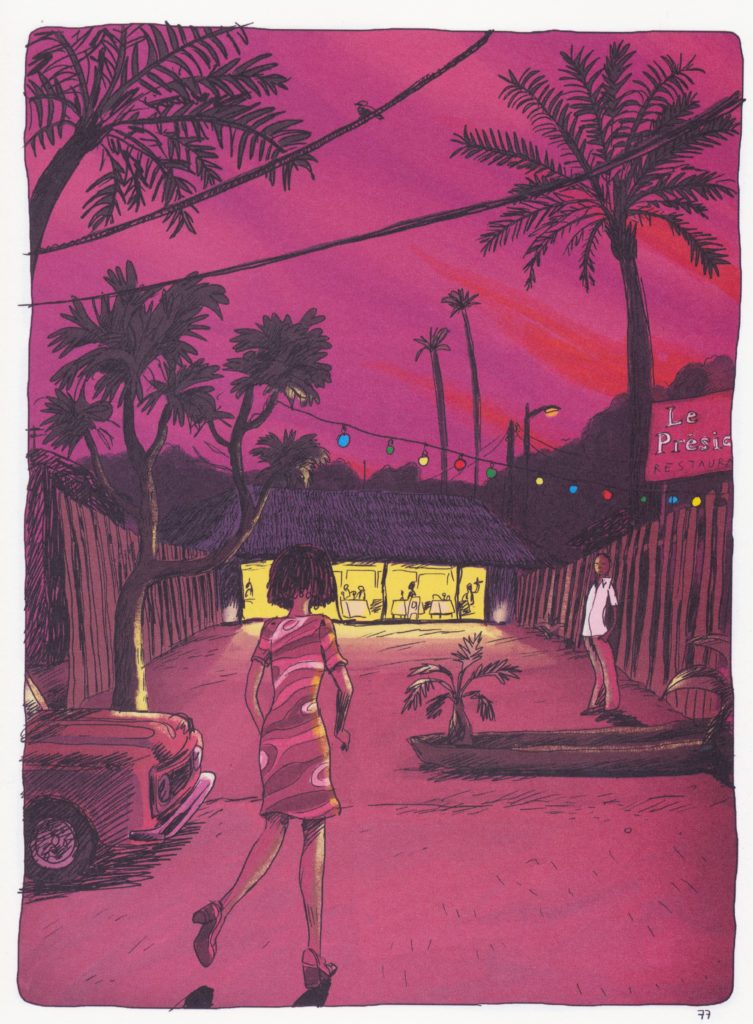 Everyday scenes are not only shown in the plot on a secondary level but are also found in the full-page panels. Such Splash Pages give an atmospheric impression of everyday life in the village. The choice of language in comics is often an effective means of bringing everyday African life closer to the reader. In the case of Aya, this is also interesting in a historical context, with the use of “typical” African trend words or ritual phrases of the 1970s, the period in which the story is based.[21] In addition, the medium of comic can elegantly illustrate typical communication and etiquette in everyday life. The conversation between Aya’s mother and Adjoua, for example, is indicative of the typical welcome rituals (at least in francophone West Africa), in which one asks first about the well-being of the father, mother and siblings before asking about the health of the direct interlocutor.[22]

The joint comic Le retour au pays d’Alphonse Madiba dit Daudet by Christophe N’galle Edimo and Al’Mata tells the misadventures of a young man named Alphonse, who flunks out of several French universities and is deported. Back in his home country “la République de Balaphonie” (a fictional French-speaking African country), he declares himself a “highly-skilled, well-educated” man. Alphonse is aware of the fact that his sojourn abroad gives him a better position in the village community, and he knows how to exploit this, claiming that a high office is being held for him. Gradually, however, it becomes clear that he prefers to idle away his time rather than, as he promised, to search for solutions to the problems of the country. The comic shows the high hopes the family and the whole village had in the young man after his return from Europe, and also how hard it is for him to confess his failure and disappoint his family. The comic also focuses on the influence of migration on the identity of a person. The tight bonds of family and international relationships are part of everyday life in African countries, where interconnection with the original colonial power (in this case with France) is strong. 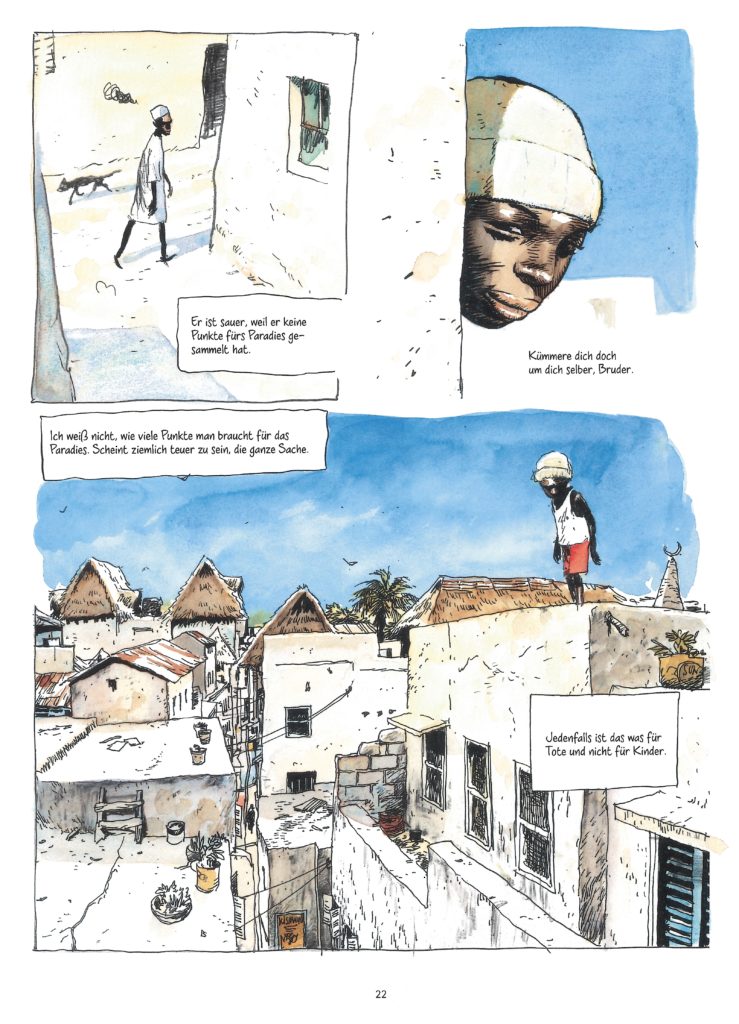 Kililana Song is a two-part comic by French author and comic artist Benjamin Flao. The story takes place mainly in Lamu, a small town on a sand island off the Kenyan coast, and deals with the everyday life of the street boy Naim and his life between tradition and modernity. His days are marked by avoiding his brother, who wants to force him to go to the Koran school. He prefers to spend his time with friends and to supply an old man with drugs. Illegal trade with Qat and the use of cocaine by the white population are treated as everyday topics in this graphic novel.

The idea for Kililana Song came to him during his travels through Kenya and Eritrea. In addition to the controversial theme of drug use, the author also shows the idyllic side of everyday life. The city of Lamu is, for example, free of cars, and was added to the UNESCO World Heritage List in 2001: a fusion of various building techniques (Arabic-Islamic, Western, Indian, Persian, and with the influence of Swahili traditional forms), is reflected in its architecture in the over 700-year-old city.[23]