What is the potential of the medium Comics in the area of historical scholarship and what different approaches do Comics offer for historical research? How do matters stand at present with the African comics-culture, or better, the African comics-cultures? These questions were addressed as part of a two-semester course in 2015 of the Basel Afrika Bibliographien at the University of Basel, titled Afrikanische Comics/Afrika in Comics, in order to put on an exhibition on the basis of the results. In 2018 started the work on the second, revised edition of the book Kaboom! African Comics in Focus. As part of this work, this online exhibition was conceived. 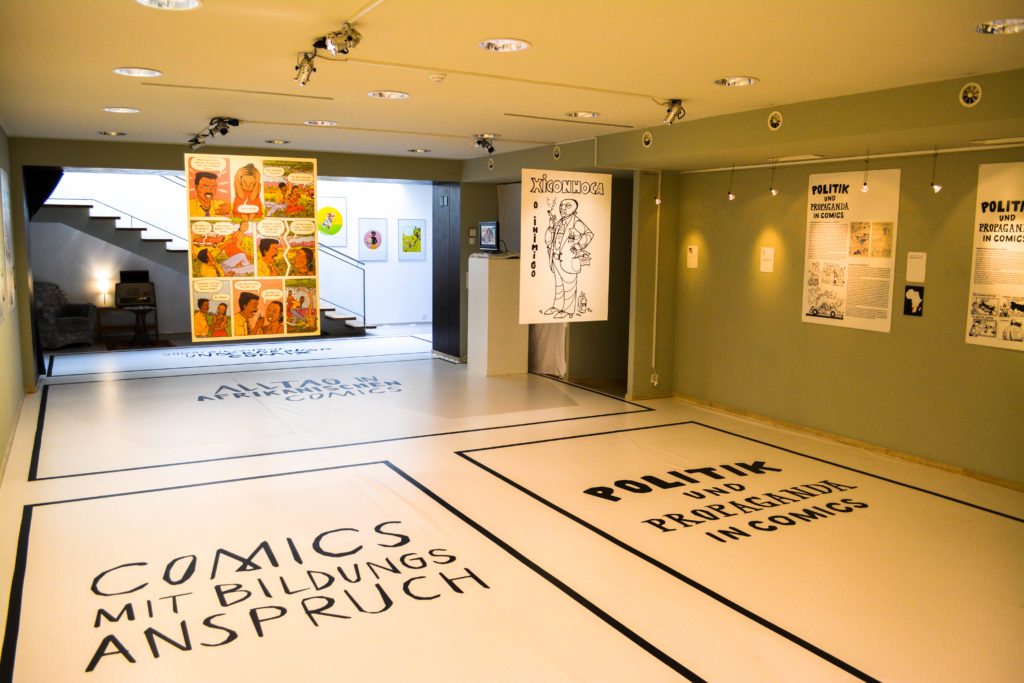 A view into the exhibition space.

The project led to an intense multi-year engagement of the entire library team with the medium of comics. The exhibition of the BAB needed, of course, raw material in the form of comics. Thanks to our buyer in Windhoek, Namibia was very well covered. The remaining comics were found through conventional antiquarian, book trade or publishing searches. In an acquisition trip to Cape Town several South African comics of less well-known authors could be purchased. As of mid-2018, the BAB library has 475 comics and 67 cartoon publications.

Every comic reflects the ideologies of the period and society from which it emerged. Fears and antagonisms are expressed in images and symbols. For this reason, it is our objective to present the image of Africa —both from outside and within the continent— in a differentiated manner. In the exhibition, comics are presented on the basis of case studies covering all regions of sub-Saharan Africa.

Complementary to the African examples, the exhibition deals with the European image of Africa, from the 15th century up to present-day stereotypes. Special attention is paid to the image of Africa in Switzerland, with the case example of Globis Weltreise (Globi’s World Tour). Such racist representations of Africa have only lately come into question and led to discussions about how reprinting should be adapted.

Not all comics are for entertainment alone; they can also be used to convey diverse subject matter. These comics belong to the genre of educational comics and are of great importance for the treatment of comic culture on the African continent. The South African authors’ collective Storyteller Group has published comics on various subjects with educational aspirations. The comics Earth Shakers and Heart to Heart are presented as case studies. This exhibition having been written by students of history, educational comics with historical content must needs be explored. Case studies include the comics Vusi Goes Back and the biographical comic Nelson Mandela.

Comics and also cartoons are often used to convey political propaganda, the visual form of the medium being particularly suitable for the conveyance of political ideologies. A case study of this is the propaganda figure Xiconhoca from Mozambique. An analysis of the medium cartoon is made using the example of the South African illustrator Zapiro, who first worked in support of the Anti-Apartheid Movement and later dealt with the domestic political situation of South Africa.

Depictions of everyday life have a central role in African comics and are found in almost all genres. The six-volume series Aya by Marguerite Abouet, the comic Le retour au pays d’Alphonse Madiba dit Daudet by Christophe Ngalle, the two-part comic Kililana Song by Benjamin Flao and the project À l’ombre du baobab of the organization Équilibres & Populations serve as case examples for the topic of Everyday Life in Africa. 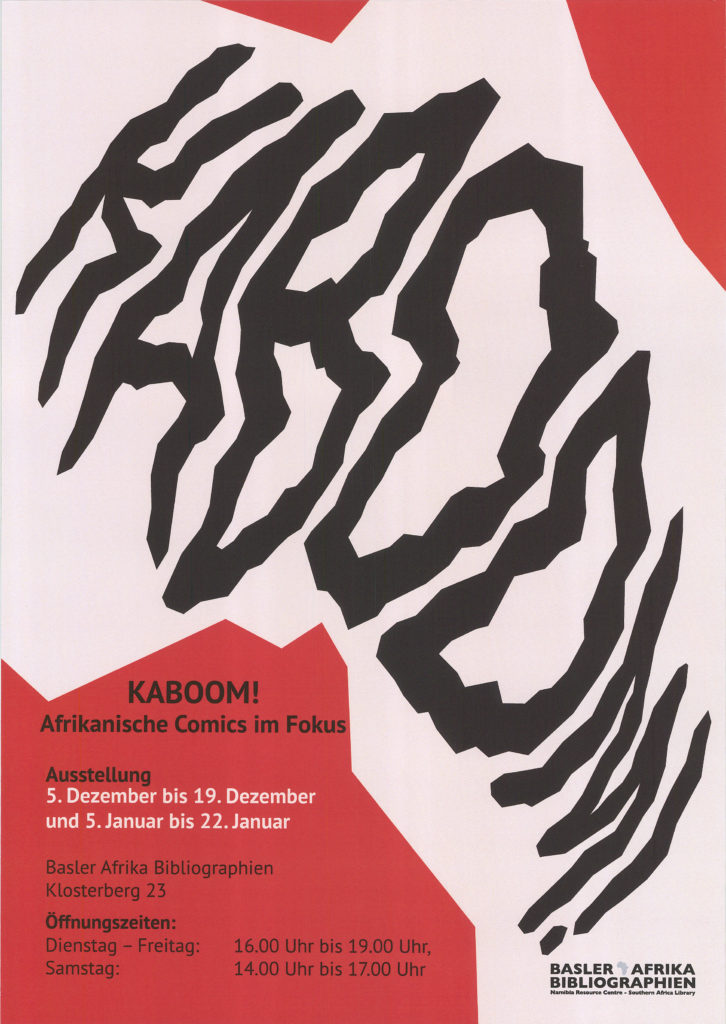 Talking about comics, superhero comics are a must, of course. African comics have also brought forth a team of superheroes. The genre, the boom of Afrofuturism and the emergence of a new pan-Africanism through the African comic series Supa Strikas and Powerbolt as well as the internationally successful Marvel blockbuster Black Panther are discussed.

And then there are the comics that do not focus on morality and virtue, but which deliberately break with conventions by staging violence, brutality and sexuality for its own sake. These politically charged comics were independently produced and are known as Underground Comix. First appearing in college humour magazines and subcultural magazines in the 1960s in the US, they did not compete with the traditional comic books at the newsstand, but were mostly distributed via alternative channels. The content and style of the illustration were a deliberate rebellion against the limitations of the Comics-Code Authority and of the editorial guidelines and genre formulas of traditional comic books. The South African Bitterkomix by Anton Kannemeyer and Conrad Botes serve as a case study.

The examples presented in this exhibition are intended to illustrate why an examination of the medium of comics is worthwhile in the area of historical scholarship. Comics have their own history, they have been an integral part of our culture for more than 100 years and they also represent a relevant source for research into the recent history of our society.

If you liked this exhibition but would still like to learn more on African comics, watch out for our new publication coming out this fall.

Thanks go first and foremost to these students who, through great motivation and a lot of hard work, made the project a success.