An evening of dance, music and drama:
Concert and Dance evenings and Vaudeville

At Concert and Dance evenings, a vaudeville group appeared until midnight and was then replaced by a jazz ensemble, which played until 4 o’clock in the morning. The performing artists were often members of both the vaudeville group and the band, and bands often accompanied the vaudeville show at certain moments before their official appearance.[34]  Similar to Jazz, the vaudeville shows were originally inspired by imported American culture. Vaudeville troupes dressed up as American movie stars and often copied their dance routines, but also performed everyday scenes —both tragic and comic— as theatrical interludes.[35] The roots of vaudeville are much older, however, and can be traced back to the so-called Minstrel groups, comedian singers and acting troupes.

The Minstrel tradition of racist shows with white actors in blackface, arrived in South Africa as early as the 19th century and was soon adopted by local actor groups. Soon Africans also appeared as Minstrels and adapted the genre to their own purposes.[36] The vaudeville troupes of the ‘30s to the ‘50s, on the other hand, were often large ensembles of male and female singers, dancers, actors, jugglers and other artists. The character of the shows was seldom directly political but often ironic and reflective of everyday life, and therefore inherently critical. 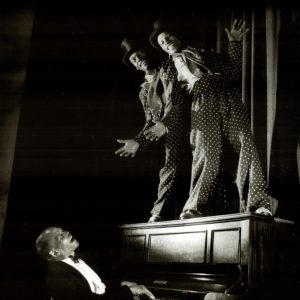 After 1960, through the intensification of apartheid as a result of the Sharpeville massacre and the independence wave convulsing the African continent, the Marabi culture that preceded the Concert and Dance, along with the entire indigenous population, was torn from the inner cities and banished to the townships, where it took on new forms. The Concert and Dance form was also forced to change, the intensified censorship of the apartheid government having driven many South African jazz musicians into exile.[37] However, bits and pieces of Marabi, early jazz and vaudeville were incorporated into new genres and have shaped South African music culture to this day. Many of the practices of early vaudeville can be seen, for example, in the performances of South African Agitprop theatre groups (sponsored by the ANC in the context of the cultural struggle against apartheid), which successfully toured the world from the 1970s onwards.[38]