Isicathamiya is a genre of South African a capella music sung by male choirs. It was first sung in Zulu and later also in English. The choral speaking is often done in call and response. The four different voice ranges (bass, tenor, alto, soprano) are all taken over by male voices, with the soprano taking over the lead voice, and the other voices giving the response. The song is accompanied by special sequences of dance steps and clapping. 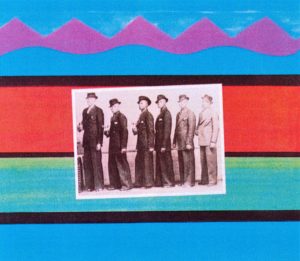 The beginning of Isicathamiya can be traced back to an article in the newspaper Ilanga Lase Natal (Sun of Natal) in 1890.[1] At that time, the Afro-American Virginia Jubilee Singers, also known as Minstrel Vaudeville and Concert Company, was touring with their bandleader and singer Orpheus McAdoo through South Africa. The group contributed significantly to the success of the new music style, which spread rapidly from the cities to the rural regions and on to the mission stations.

At this time in South Africa, many people were migrating with the work available, leading to the social group referred to as Migrant Workers. The African population was forbidden to live in the cities, but they were allowed to work there. On the outskirts of the city, the close proximity of people with diverse migration backgrounds and from various cultures living together in simple housing[2] affected the development of musical styles. Since the First World War, the best vaudeville and ragtime groups were discovered there, for example, the Reuben Caluzas Ohlange Choir. The members wore chic uniforms that were adapted to the white style of dress. The choir’s singing stood out due to different voice ranges that alternated during the songs. Its whole stage presence made it for the rural population a mediator of the ideal of the elegant black town-dweller (Coons). This early style of Isicathamiya is called Isikhunzi.[3]

Another cultural practice created by urban migration (and an additional source of Isicathamiya) were dances, such as the Ingoma dances. The rural and urban music scenes differed in their dances, organization and practices.[4] Ingoma remained, however, always a part of Isicathamiya.[5] The previously polyphonic songs were adapted to the Western standard four-voice structure, this due to the increased activity of Christian mission organizations, which made a link between the city and the country and thus provided a bridge for music.

At the end of the ‘20s, Isicathamiya had taken on its present form. The whole process took place within a generation and can be ascribed, in addition to migration and urbanization, to changes in social mixing.[6] Up-and-coming groups such as the Crocodiles and the Evening Birds also enhanced the city –country exchange. The Evening Birds enjoyed great success, based not only on their recordings — they only recorded a few songs — but largely on live performances, which were often supported by tap dancing. Also launched in the ‘30s was Solomon Linda’s Imbube style. Through the discovery and support of the record company called “Gallo”, his song Mbube became a hit.[7] Mbube was re-recorded throughout the century in all manner of variations and by different performers, and even reached the USA, where the song still enjoys great popularity under the title The Lion Sleeps Tonight. 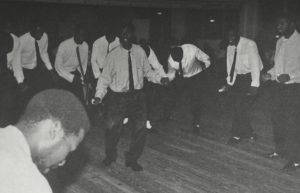 The singing contests of that time were dominated by the Crocodiles and the Evening Birds, who ruled the Isicathamiya scene until the ‘40s.[8] Over time, some school choirs joined the scene, these oriented towards Isikhunzi. These school choirs were led by a choir called Amanzimtoti. In the cities, the originally all-male choirs were gradually opened to women. One of the signs of the increasing expansion of urban life forms, this model gradually expanded from the city to the countryside.[9]

In the ‘70s a new group called Ladysmith Black Mambazo, together with its founder and bandleader Joseph Shabalala, came into the limelight. It recorded several songs and became internationally known through its collaboration with Paul Simon. Its biggest hits were with Paul Simon and the album Graceland in the ‘80s, thereby bringing Isicathamiya as a genre into the 21st century.[10]